Here is the worthy winner of Second Place in the Dolls House Emporium Creative Competition 2013.
It’s called Beastly Botanicals and is the creation of the talented Jayne Woodward, from Staffordshire.

The building and its contents are based around the story of a fantasy plant laboratory owned by Dr Morpheus T. Seedbender PD (Plant Doctor).

Having lost his mind he is totally fearless and will fuse all manner of plant life never knowing what, or how dangerous the final result will be… or so the story goes! 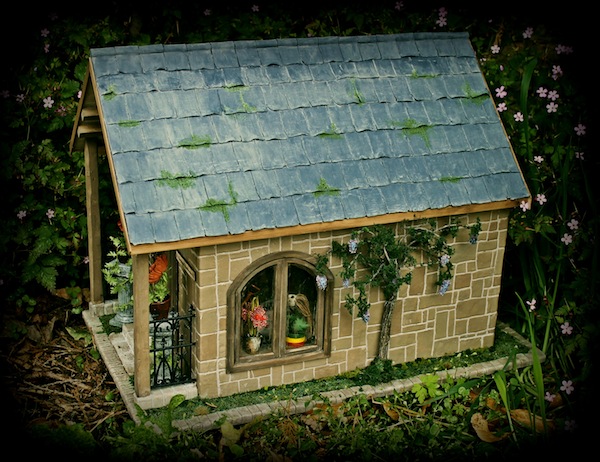 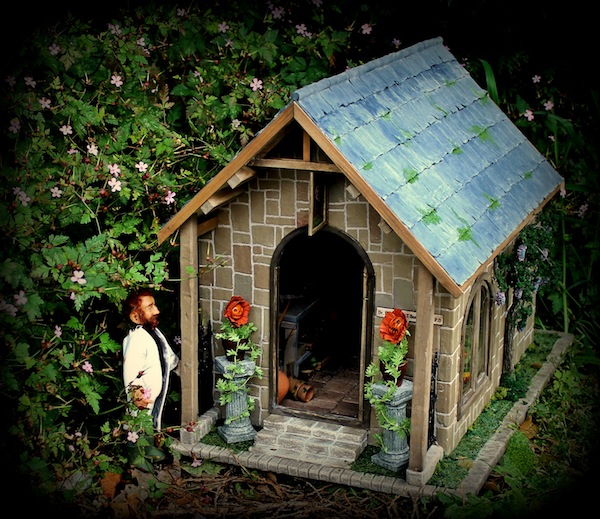 The tale behind his lab is that due to the highly controversial nature of his work he lives high in the mountains. This location was picked, not only because of its remoteness, but because he has access to all the weird and wonderful flora and fauna that has been left untouched by people who never venture so far.

Unfortunately, the lack of oxygen at this altitude, the absence of other humans and the foraged wild mushrooms he eats has slowly sent him somewhat deranged! 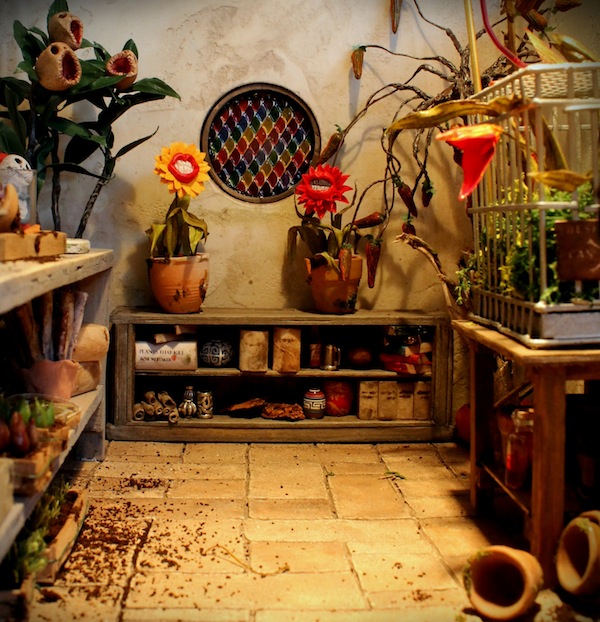 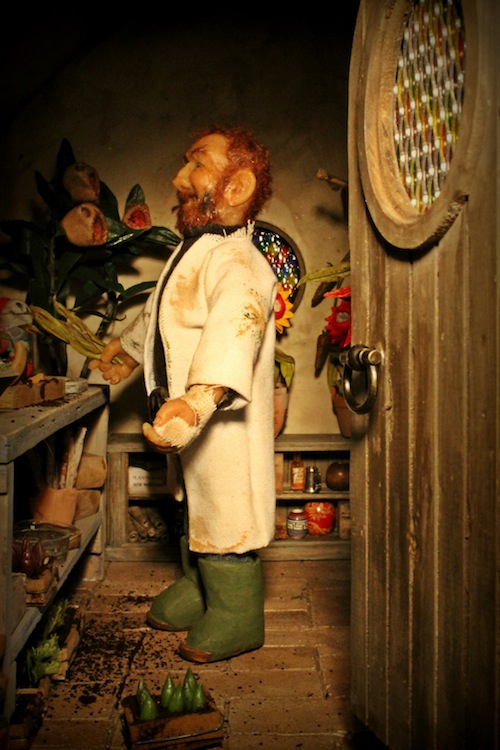 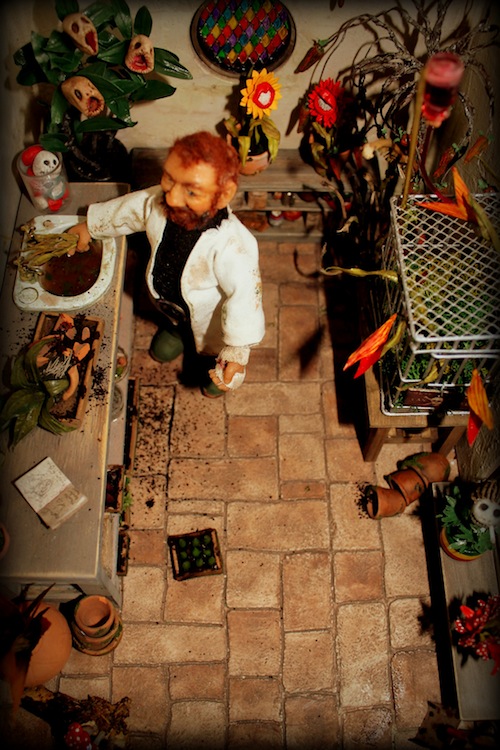 Here’s Jayne to tell you the rest of this amazing story: ”Growing up the outside of his lab you will see a Hysteria tree. A wisteria with the added bonus of screaming banshee flowers, which alert him to any intruders.

“Protecting the front entrance to the lab are Papahi and Peyton Pumpkin. Papahi, although mischievous, is incredibly smart and partnered with Peytons’s reputation as the village warrior they make formidable guards.” 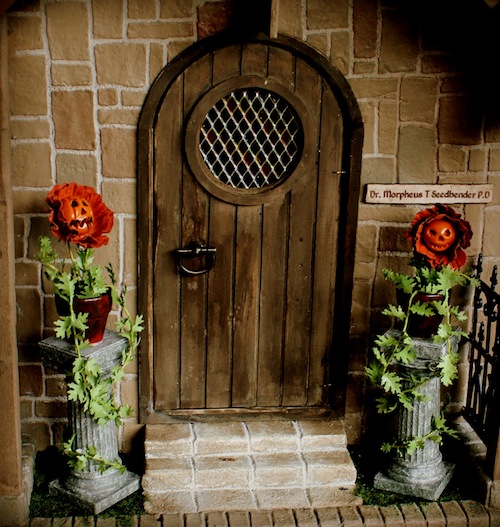 Inside the lab are some extraordinary specimens.

Jayne says: “Inside the cage he keeps the Pyromandible plant (a most dangerous example of science gone wrong). With the ability to unhinge their lower jaw they are able to bite with a force able to break bones. This plant must be kept constantly sedated. A near miss while changing the drip feed recently left the professor with a bleeding hand and broken thumb.” 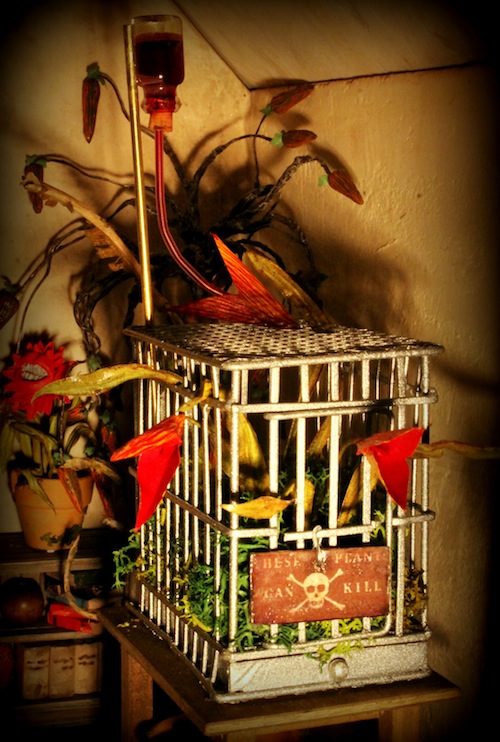 “In the window you will see Amanita. A beautiful red and white petaled plant. Created using Fly Agaric mushrooms to forcefully induce a symbiotic relationship with the Pyromandible. The drool of Amanita has psycotropic properties used primarily for the sedation of the pyromandible.” 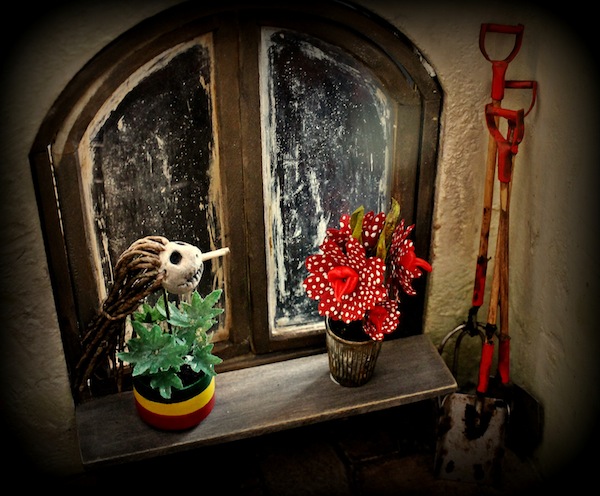 “Sitting next to her is Marley the Rastafarian plant. Strategically placed that his deadlocks are out of reach of the Pyromandible but that the smoke from his cigarette is not. This also has a sedative effect on the Pyromandible.”

“The two plants under the round window are part of the genus Floozy. Floozies are an impish breed, which have a tendency to torment and tease. With their huge toothy smiles the professor finds them hard to resist and rarely chastises them." 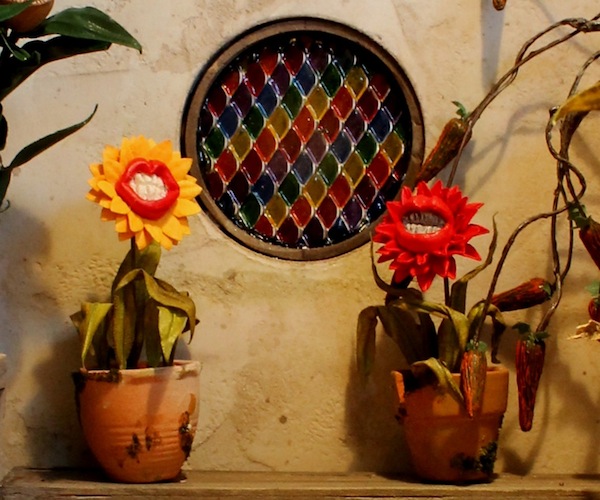 “The professor claims that the three-headed plant in the corner is a distant relative of the mandrake. Or was it an experiment gone wrong? Whilst a true mandrake will scream when picked all this plant is capable of is singing constantly. In the absence of any electricity the professor lets him stay for entertainment.” 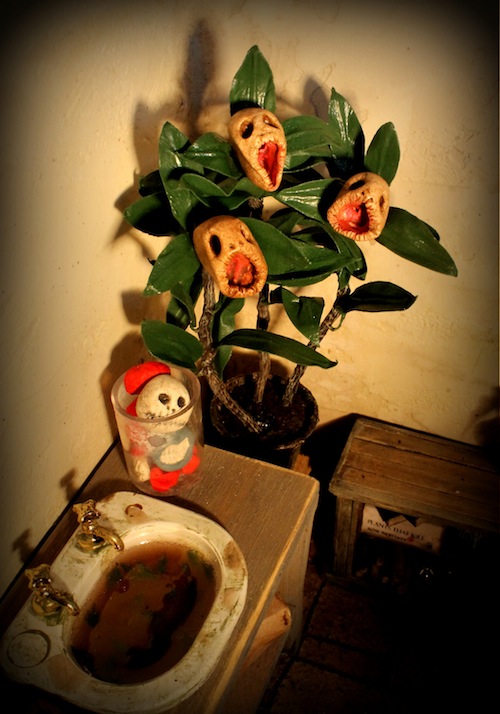 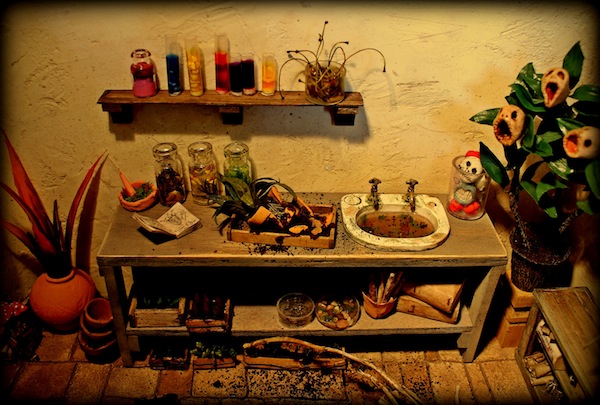 “The fruit tree in the corner is a Carrow tree. Bred primarily to provide food for the professor, the marrow and carrot fusion apparently makes a wonderful soup.” 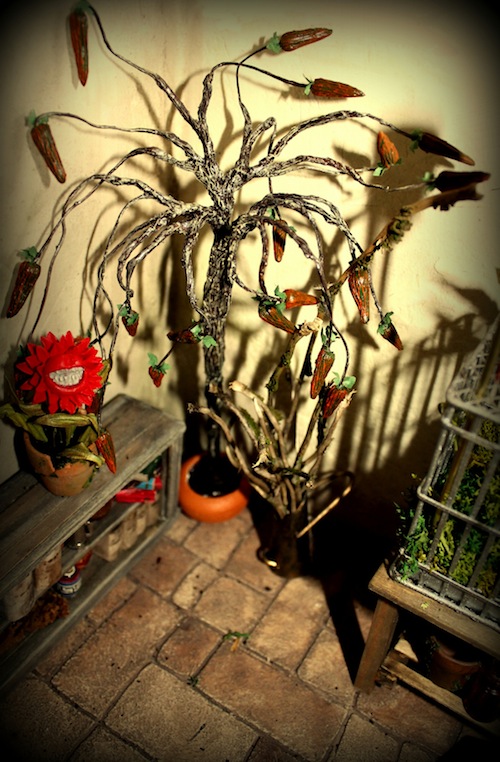 A wonderful imagining of a superb scenario! All from the inspiration provided by The Cabin, from The Dolls House Emporium.

Here are a few extra interior and exterior shots from Jayne's work, which earns her £350 of Dolls House Emporium vouchers. 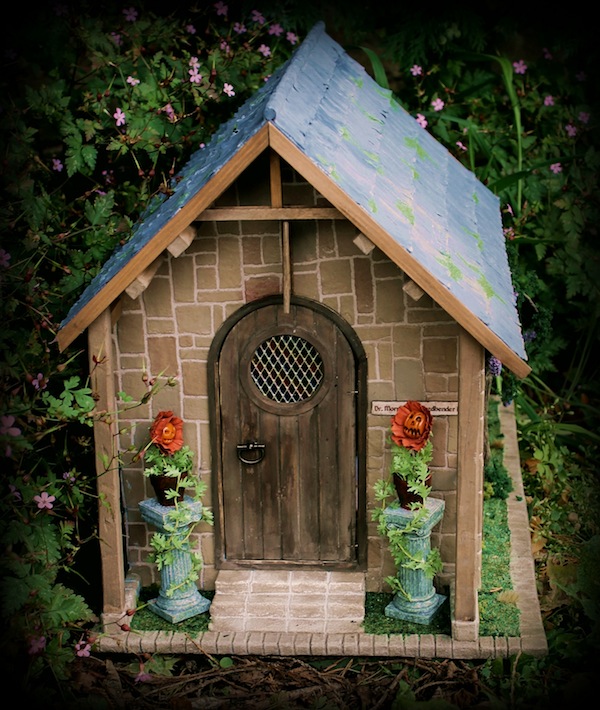 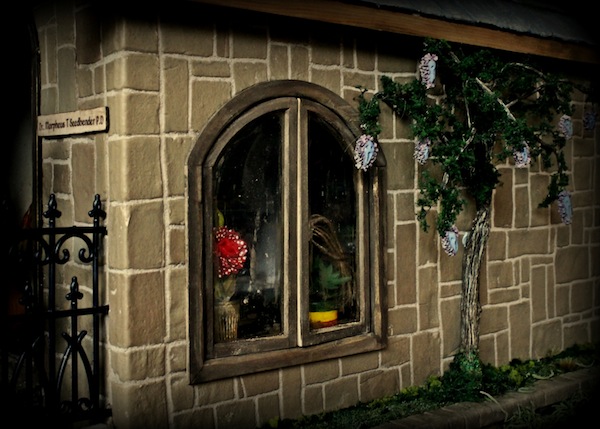 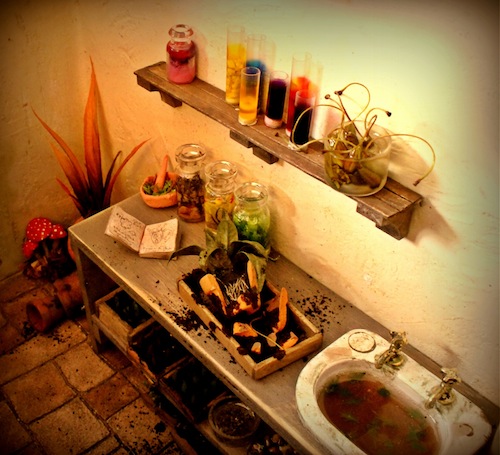 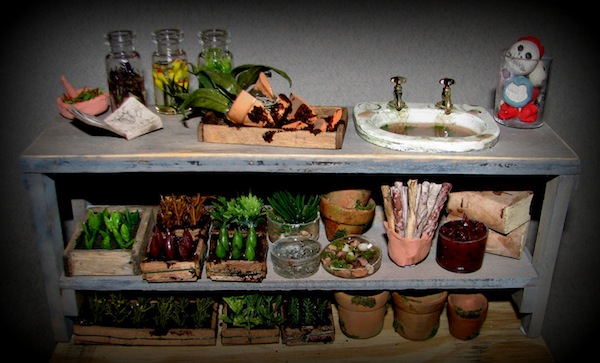 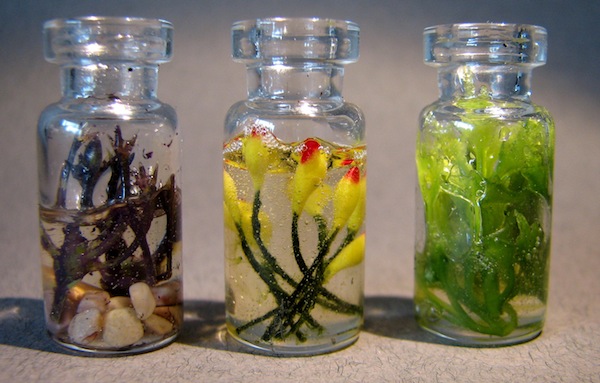 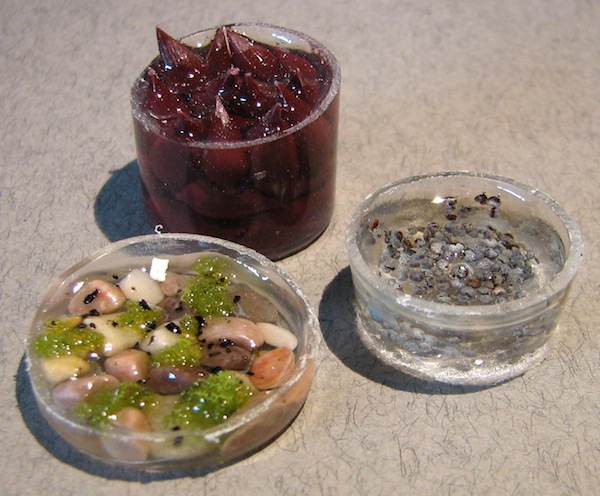 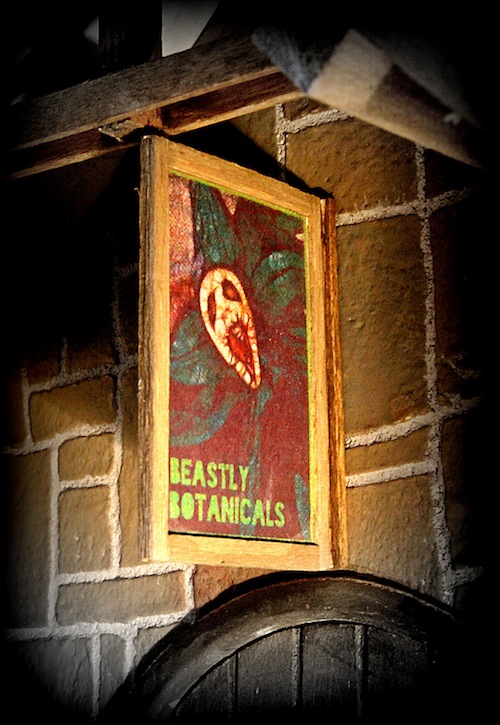 Fab new competition! Have a go at winning some minis!

WIN a set of garden goodies worth over £60!

Just tell us the PRODUCT NUMBER of the minis featured in close-up below.

Email your guess to pr@dollshouse.com 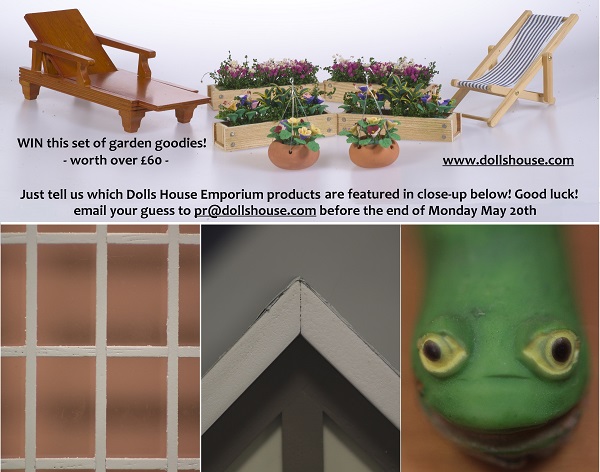 The 2012 Creative Competition from The Dolls' House Emporium is being launched with a brand new kit to inspire.

The contest is an annual challenge to customers and offers a top prize of £650 of Dolls House Emporium kit.

The basis for inspiration this year was chosen due to popular request - The Corner Shop. 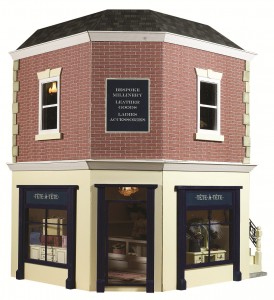 What would YOU turn it into? Last year's entries based on a Garden Pavilion kit included a railway station, B&B, village halls, scout camp hut, pubs, Welsh cottage, Hansel and Gretel witch's house, a cafe, a farm, a knight's resting place... and much more! 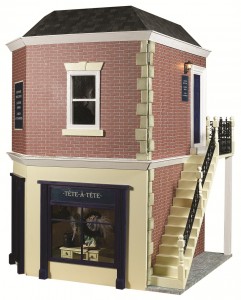