At last – we can bring you news of our Third Place winner of the 2013 Creative Competition from The Dolls House Emporium.

It’s Janice Curtis with her Race Trim Barber Shop, based – like all the others – on our new Cabin small project. 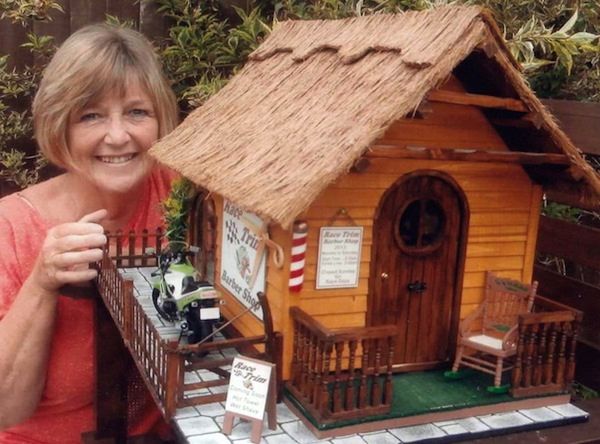 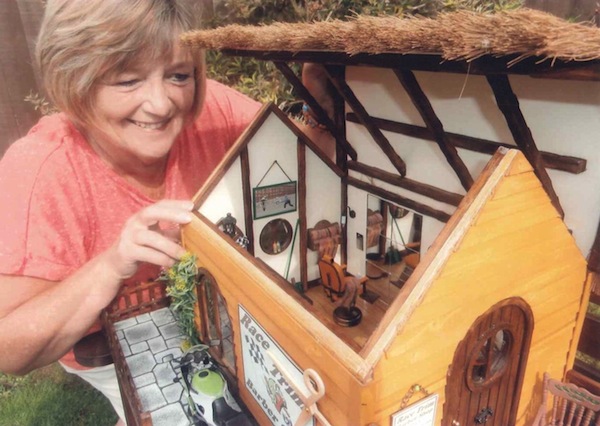 We just loved the idea behind it and the way that Janice incorporated the theme through the whole project so perfectly.

We smiled, said ‘wow’ - this entry was always going to be a contender! 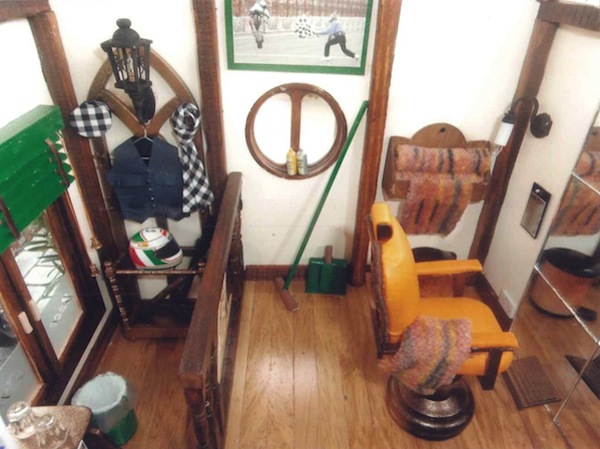 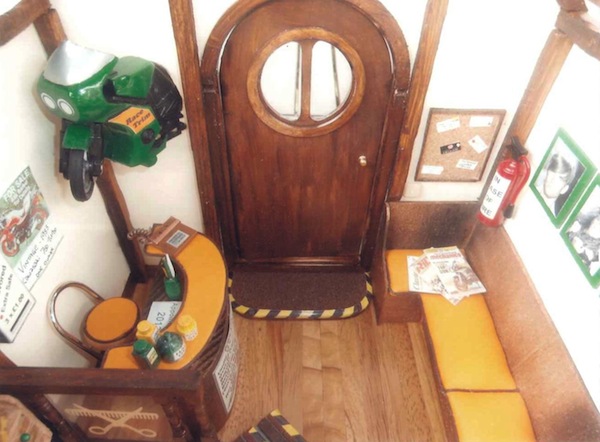 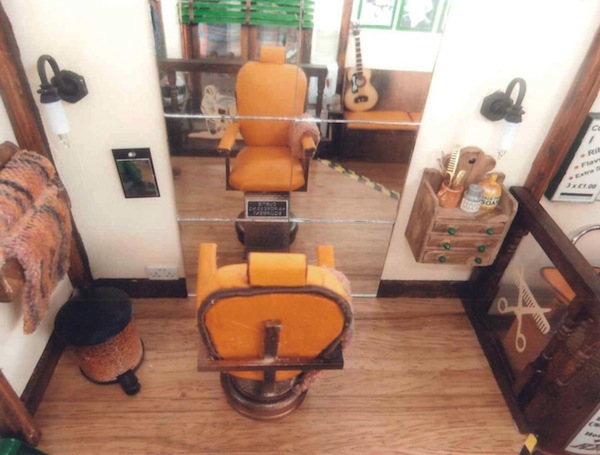 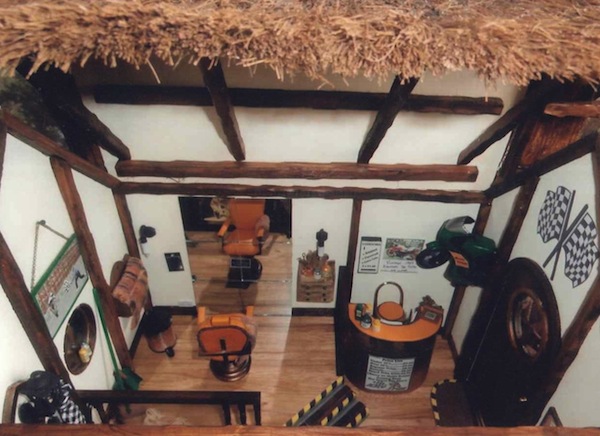 Janice, from Norfolk, says: “My friend’s son-in-law had just opened a barber shop in our village and I thought perhaps I could turn my Cabin into a barber shop.

“As both myself and husband Dave are keen followers of motor bike racing and own a vintage bike, I thought I would use the biker theme.

“I then thought of the name Race Trim Barber Shop. The name Race, because Race was my maiden name. Trim? Not only because it means cut but a racing motor bike has to be in ‘race trim order’ before being allowed on the track before a race.” 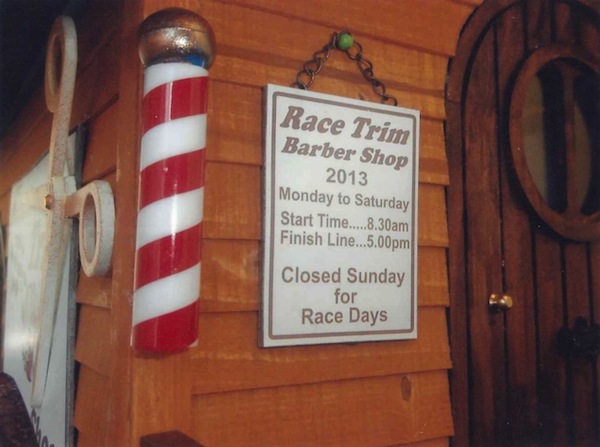 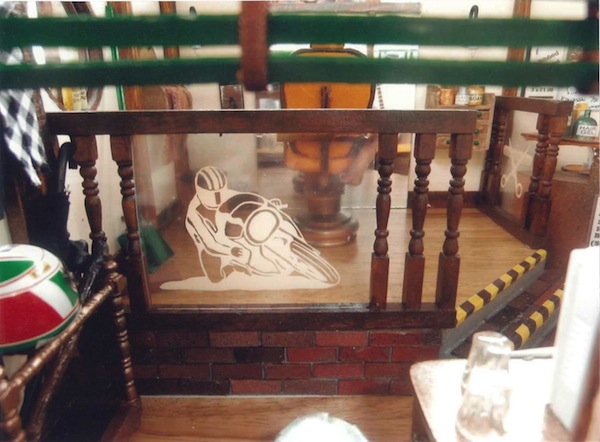 She chose orange on purpose for the customers’ chair – to make it stand out, stripping it down, re-spraying and covering with leather and brown piping detail.

The wooden window blinds are hand-made from balsa, while the magazines are all bespoke copies of real-life publications.

“Still on the motorbike theme, I asked my nine-year-old grandson Archie if he would donate one of his toy bikes. Little did he know that I was going to saw it in half, paint it a different colour and add Race Trim motifs to make a wall feature! (Thank you Archie!)

“I spent lots of fun/fiddly 12th scale hours designing/making the accessories – the outside wall cigarette stubber, the ‘anything for the weekend’ machine, the For Sale wall advertisement, the prices for 2013 and labels for all the barbers’ hair products! 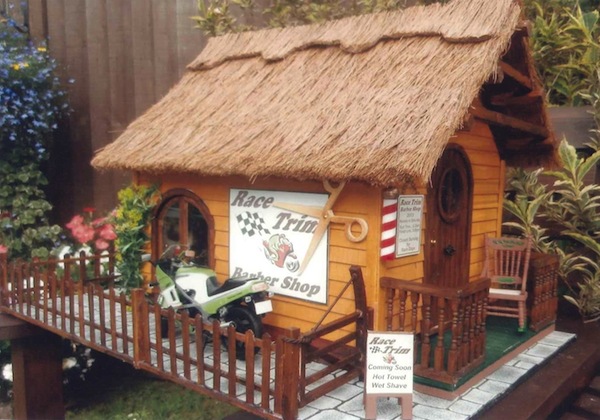 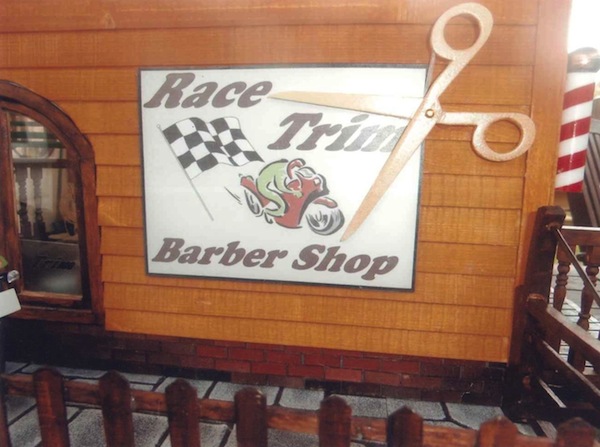 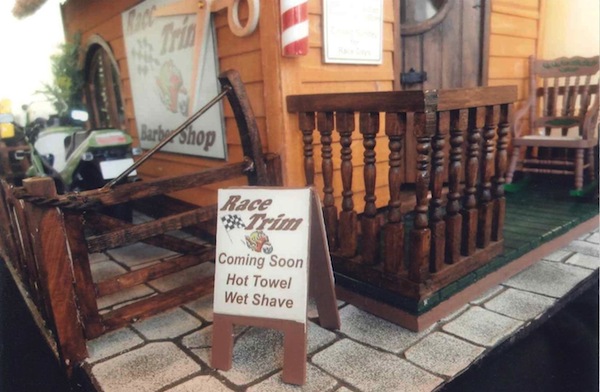 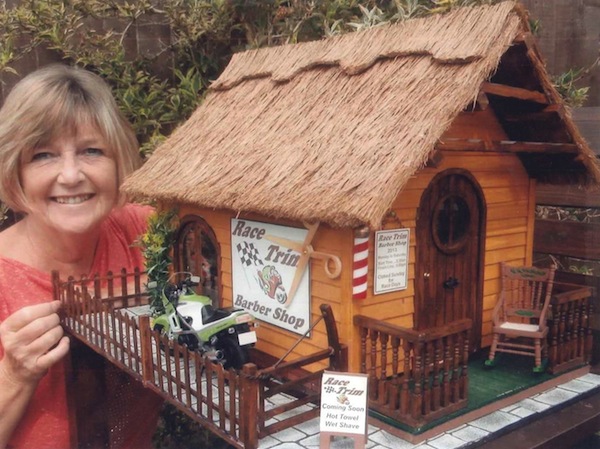 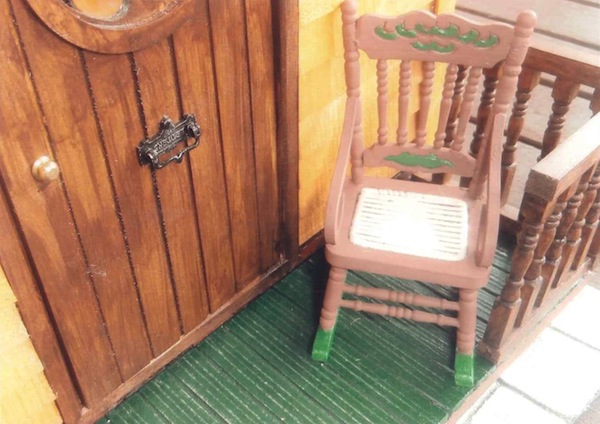 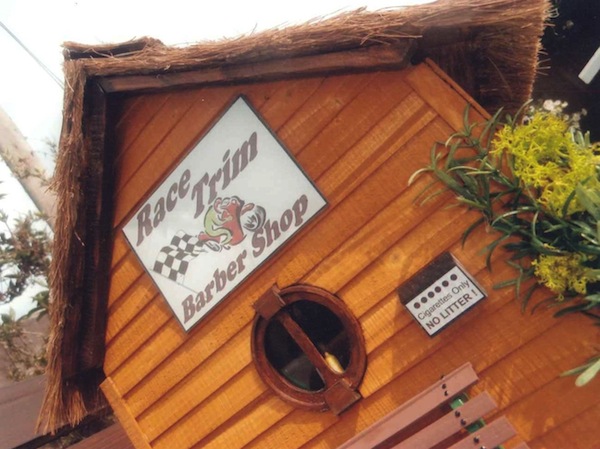 “The outside bench was made from tiny scale measured wooden planks, painted in matching colours but the temptation was too great… I added black diamante studs to resemble bolt heads!”

All of her fencing was made from cut, shaped, measured wood, stained and then stuck around the shop with an added side gate.

The characteristic barbershop pole is an old cotton reel! 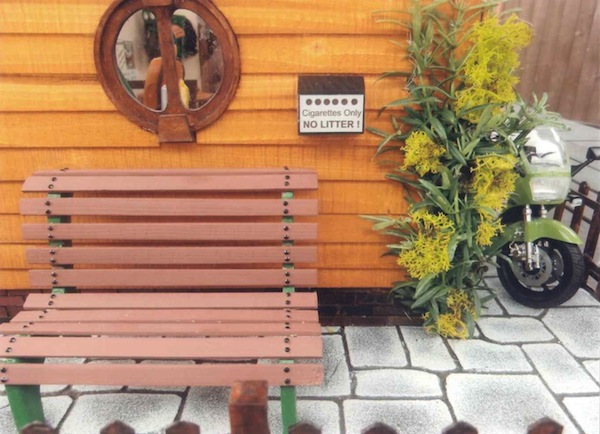 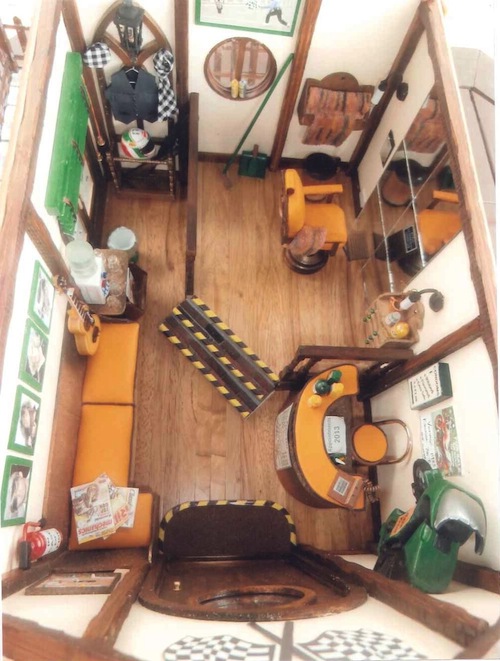 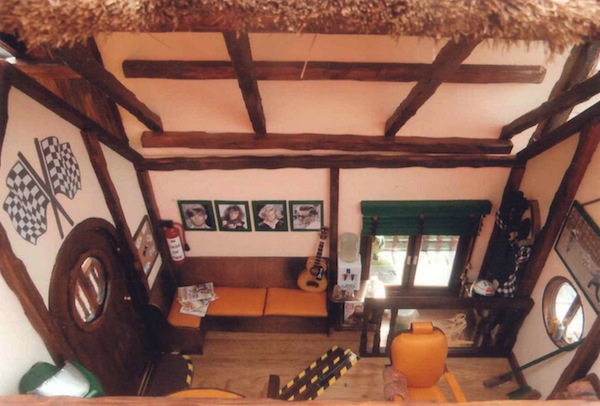 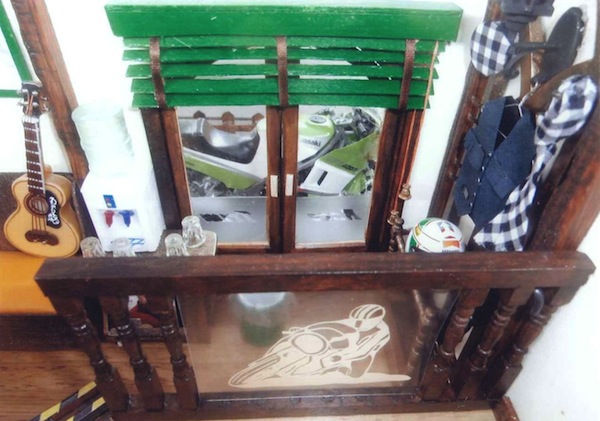 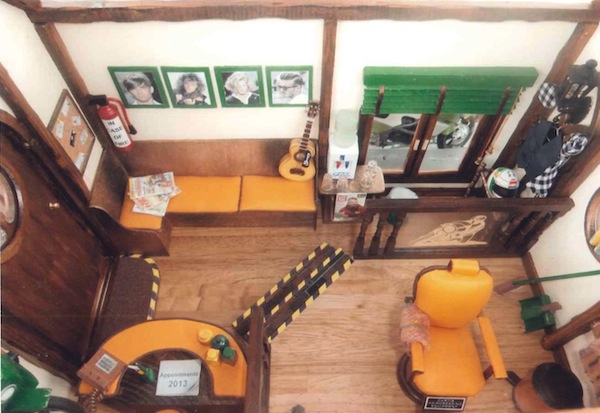 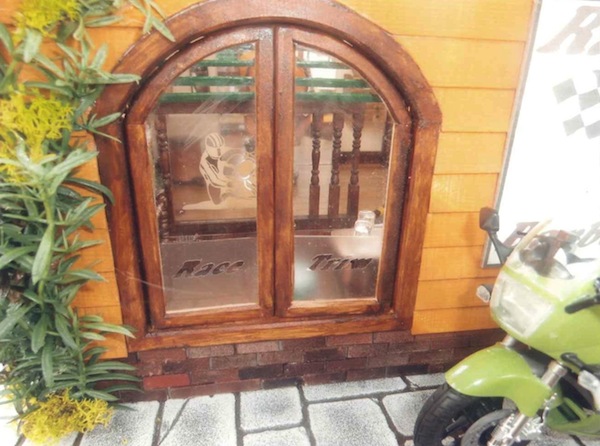 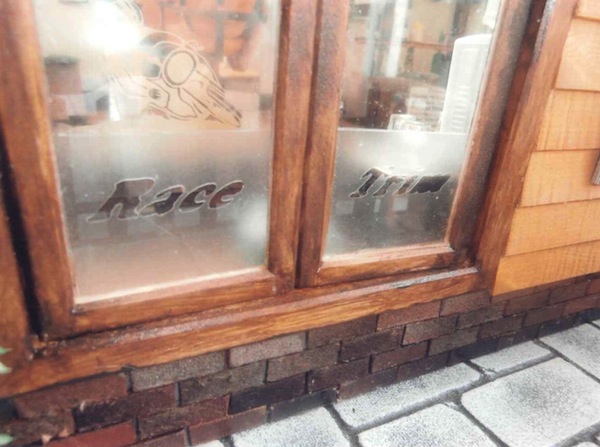 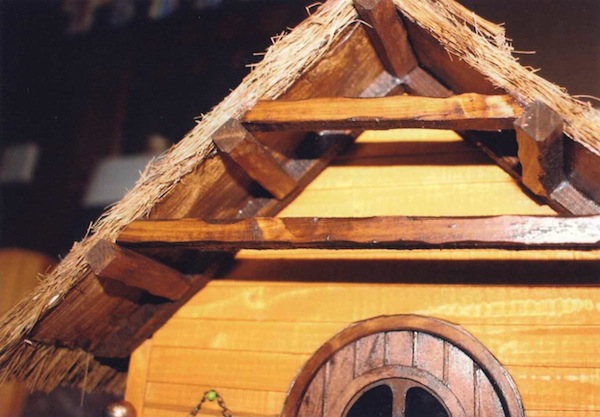 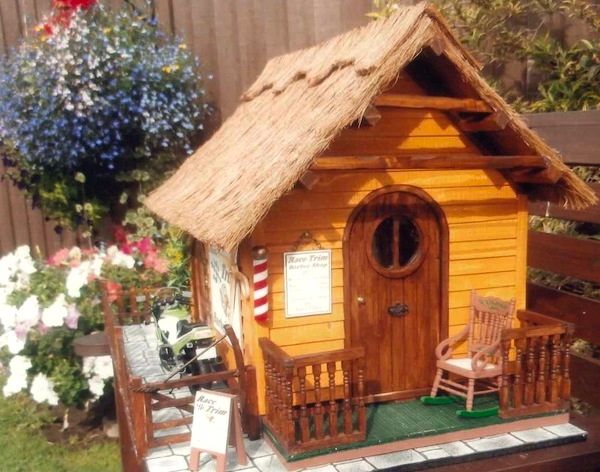 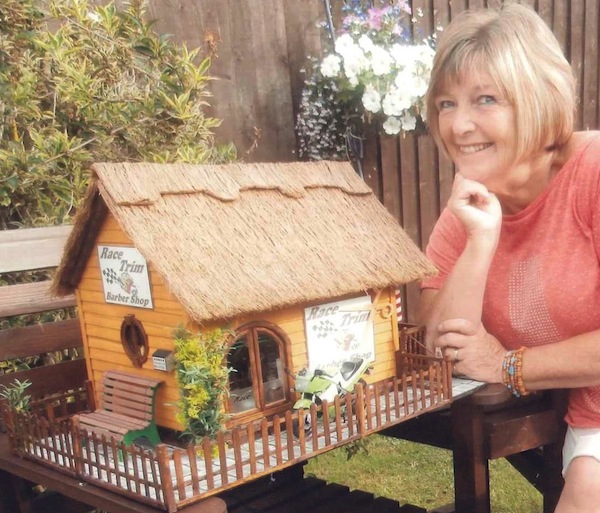 “Definitely a challenge,” says Janice, “but I have loved every minute of it”. 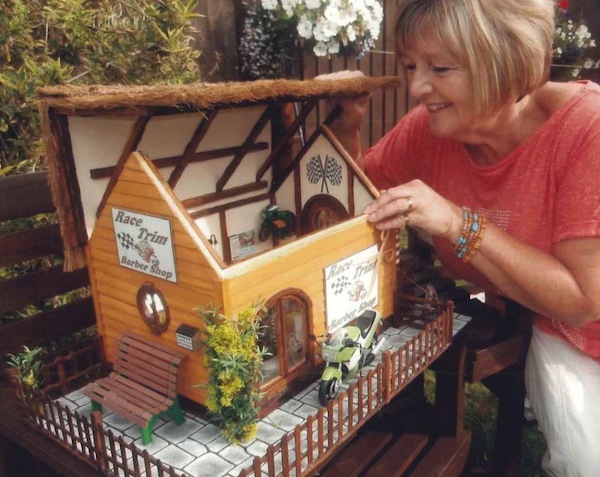 Lauderdale House, a sixteenth-century private home, received a miniature version of itself by anonymous donation two years ago.

The replica harked back to the time of its former occupant Eleanor Gwynn, the mistress of Charles II, with its décor when the creator’s family brought it to Lauderdale House.

Now, the Ham&High tells how us the artist Helen Rapley has restored the house and it stands proudly on display in the new veterinary practice in Highgate.

A dolls’ house through the generations

There’s something special about dolls’ houses made in the honour of younger family members, and for one special house this is very much the case.

Bob McDuff began the project to construct a miniature based on the Georgian villa, Tweedmouth House, in 2008 for his great-grandaughter, Daisy.

A prolific craftsman, Bob was inspired to start after reading Brian Long’s book on the subject, then visiting Tweedmouth House itself in Berwick-Upon-Tweed.

“Seeing this beautiful house gave him the motivation he needed to start work”, Bob’s granddaughter Heidi told the Berwick Advertiser.

Bob’s handmade creation was soon well underway until the months leading up to his death in 2010, sadly leaving the house incomplete.

In a touching resurrection of Bob’s vision, however, Bob’s daughter Heidi persuaded his granddaughter and her husband to take over the project.

The three more months of careful work on the house made it a perfect replica of the real-life Tweedmouth House.

The happy ending to Bob’s house came when Daisy received it for her birthday in 2011, and Heidi continued to add the finishing touches until 2013.

A lovely tale of four generations of a family coming together around an impressive handmade dolls’ house!

In a playful surrealist experience, the large-scale dolls’ house presents the collections in six themed rooms decorated with the products of H&M’s home range.

The cross-section house was presented to the world’s fashion and design media in an empty Stockholm theatre, making use of dollhouse prioritisation of design and position as an innovative showcasing technique.