Check up on Alennka's progress - maximum effort in a mini world!

Alennka has been hard at work again: our Tasmanian friend has been sitting and fretting.

Not the worrying kind – but something far more constructive.

She has been adding some of the fretwork and railing detailing to her major project, Bellerose house.

It’s a wonderful update on her progress and well worth a look.

Even if you’ve not been following her work so far you may just find yourself getting hooked!

There is a back catalogue of previous updates and information – plus a lot of good tips and advice from a whole range of intricate work.


A year of work in miniature!

Here's a superb gallery of miniatures from across the whole of 2012!

It's a personal blog to show the achievements of "Alennka", from Tasmania, Australia.

She's a regular contributor to dolls' house chit chat and we've featured her work here in the past.

This latest blog post is well-worth a read... it shows another imaginative use of a Dolls House Emporium kit, The Retreat.

Why not follow her updates? You won't be disappointed.

We all know how satisfying it is to do as much of your own work on a project as is humanly possible but creating the atmosphere of this ancient Egyptian scene will take some beating!
It's all surround the archaeological dig at the tomb of Kikerikotep.

Tasmanian blogger Alennka, who's also a regular poster on our discussion forum, has completed her work on the Dig Site.

And what a project! 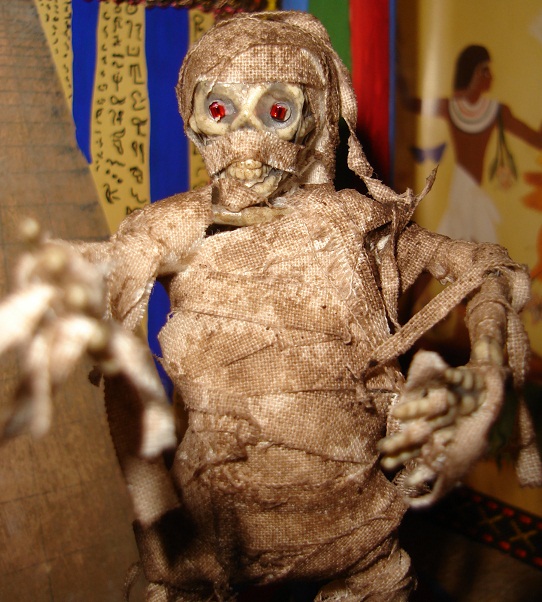 She says: "Such a lot has been going on this week it's hard to know where to start!

"Kikerikotep (just call him Kiki, it's easier) has turned out wonderfully.

"He's had his wrappings "dirtied" up a little more through the application of a couple of layers of brown paint that had been watered down a little.

"Somehow he looks more cheerful than menacing so maybe he has those red eyes not because he possesses some sort of evil power but simply because he's been awake for the past two thousand years."

"You may notice in some images Kiki (the mummy) has developed a distinct lean.

"I think he must have been hitting the jars of wine that were entombed with him for the afterlife.  It's because one of his legs is shorter than the other.  I'll find a wedge I can slip under his foot and hopefully steady him up."

She describes her project in detail, with many more fantastic photos explaining how the pilars are loosely modelled on "lotus flower" style pilars, which are meant to resmble an open lotus flower.

Her logs are bits of real firewood scrounged from the bottom of the woodpile, which she held over a candle to char them a little then added them to the fire... while all the lose parts (tools, snakes, arefeacts, cups) have been fixed in place with tacky-wax

The entire scene is covered by a clear perspex cover, which is a good job.

She explains: "No sooner had I glued the pieces together to create said case than a cat decided it looked like a good place to stretch out for a while.  At least now I know the cover is strong."

Turning a Retreat into a Folly

When it comes to making unique dolls’ houses out of our kits, we never fail to be amazed by your imagination, ingenuity and creativity.
Take Alennka - a blogger on our Discussion Forum under the name Celestial and hails from Tasmania, Australia.
She has just posted photos of her latest creation, an Oriental Folly based on our very own Retreat kit.
To say that Alennka has made a few modifications to the original kit is an understatement since she has literally raised the roof by adding extra height to the exterior walls.
And as for the roof itself, it’s a positive work of art with individual tiles made out of clay and shaped to give it a real oriental feel.
The interiors likewise are a feast for the eyes and are crowded with all things oriental, from vases to buddhas, teapots, ginger jars, dragons and statuettes.
Alennka’s thinking, as she reveals on her own blog, was originally “... something along the lines of a Japanese tea house.
"I say something like because to my knowledge the authentic ones don't have two floors and they usually seem to have the roof gable running in the other direction so the sloping side of the roof faces forward.  So it will be an oriental folly house in the gardens of some rich European, part Japanese tea house and part pure flight of fancy.”
It might be called a 'folly' but we think it should be called a triumph.