So where does the inspiration for a miniature garage come from?

Jane Lansdowne, from Derbyshire, looked to a photograph after a suggestion by her car mechanic son.

She said: “Hanging on our living room wall is a framed print, given to my husband by my son as a Christmas present in 2011. It's of a vintage motorbike outside a dilapidated workshop/shed/garage, painted by a local artist.

“Perhaps that could form the basis of my model? The more I thought about the idea, the more I became excited about the prospect of having a go at creating a garage and so Joe Tweedy and his Garage were born.” 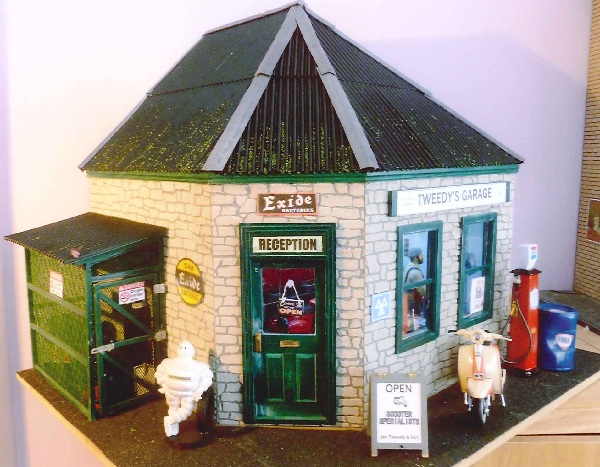 “The garage is very cramped, cold in winter but functional and houses all the tools and equipment that any mechanic would ever need. It sits on a corner plot, close to houses and a shop but everyone knows Joe and he is always intrigued by bit of local gossip.

“The 1960's has seen the 'mods and rockers' bringing their bikes and scooters to Joe's for repair as well as the fantastic new little car - the mini.

“Big Mac has worked for Joe for thirteen years now and quietly goes about his jobs but he particularly likes anything to do with welding and body work. Joe's grandson, Barry, visits the garage regularly, to have his lunch and to chat to his Grandad about scooters, cars and his latest girlfriend. 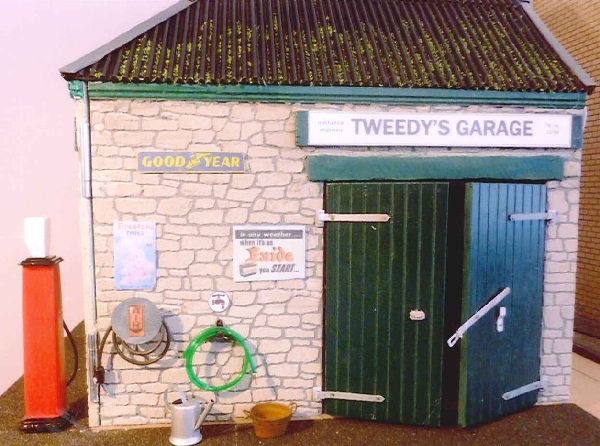 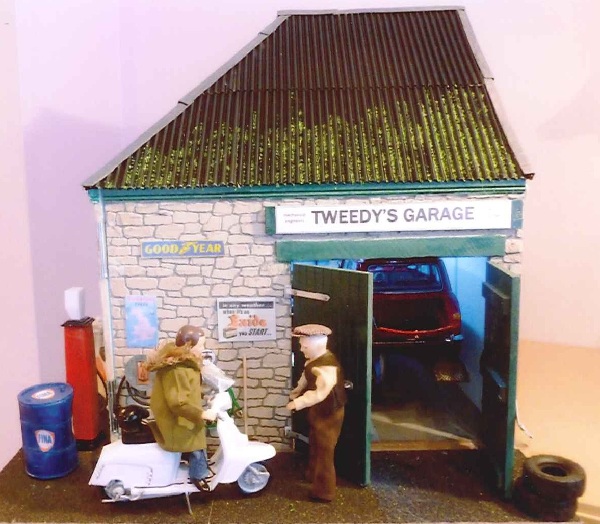 The first step was to decide how to adapt the basic 'part 2 of the corner shop' to make a convincing garage.

A reconfiguration of doors and windows was needed so there was a large double door opening at the side into the garage, two windows alongside the door, leaving a side wall blank to accommodate a 'lean to' which will house some oil drums, tyres and gas cylinders. This required one preset window to be filled in and a new hole cut for the second window and a large opening cut for the double doors. 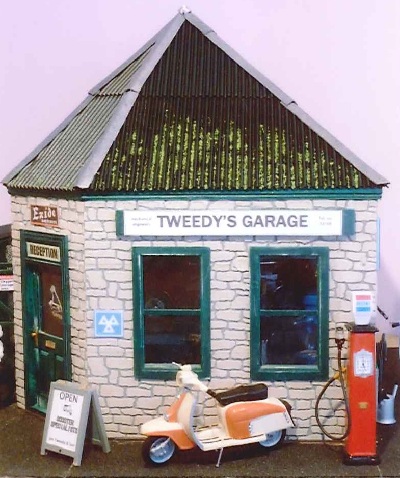 The outsides of the walls were stencilled using a specialist template and coloured cement to give the effect of stone work.

The double doors were made by using the piece of wood that was cut away; some parallel lines were routed along both sides of each piece to make the effect of planks; support struts added and then gloss painted.

A wooden form was made and attached to the existing roof frame to produce a pitched roof. Onto this were laid 12th scale corrugated sheets to resemble a corrugated tin roof. Each of the ridges were then leaded to make them waterproof - just right for the once corner smithy-turned-garage. 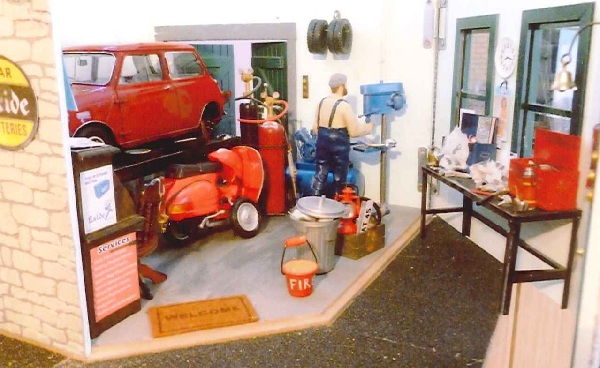 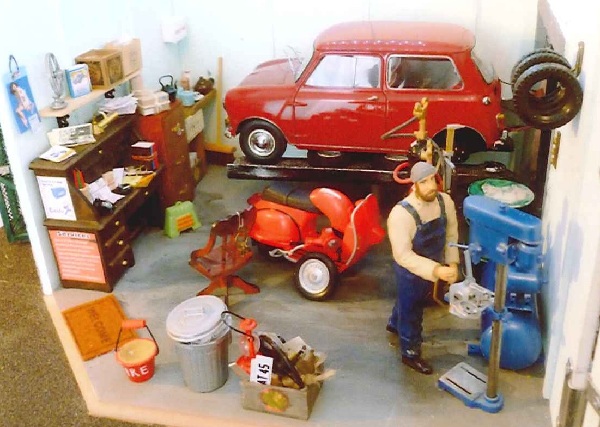 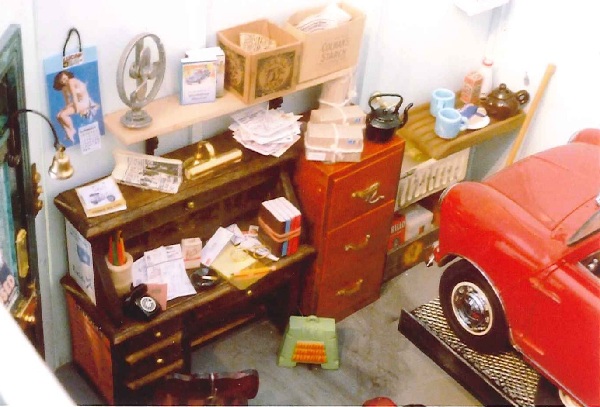 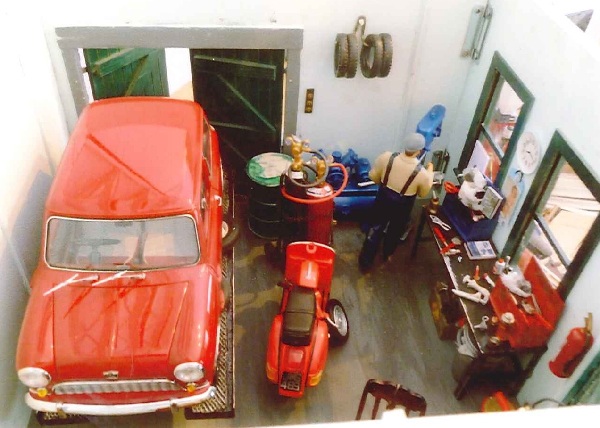 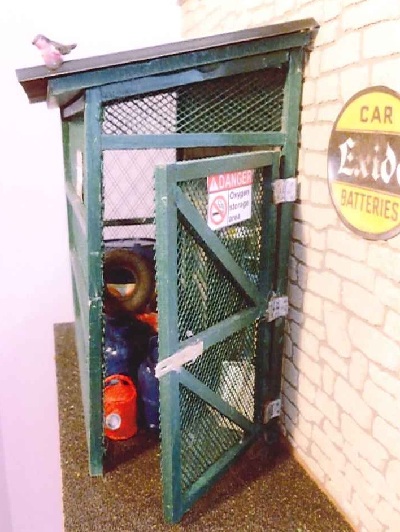 "A bit of research and imagination was needed to accessorise the garage because there is very little suitable 12th scale garage items on the market. However, I found three web sites for different modelling companies, two related to model ship building, and I was able to buy barrels and oil cans; tools and tool boxes; and a pillar drill and compressor ( both arrived as unlabelled bits and had to be constructed from scratch). I was able to adapt all these by painting and labelling etc. " 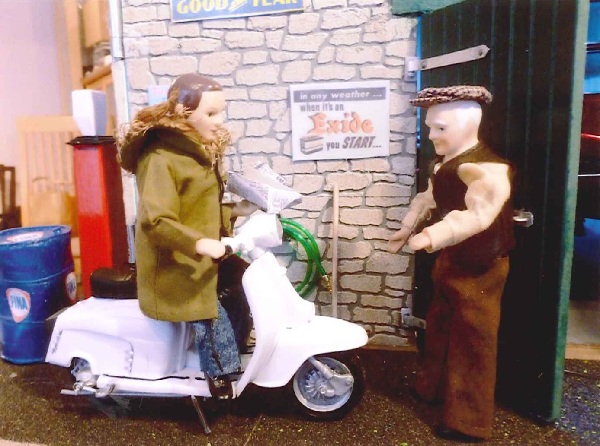 As well as building and adapting, Jane used her imagination for some of the important features:

- The petrol pump body is balsa wood with a computer socket plug as the top;

- A cut out metal door finger plate on the side as the holster;

- a sawn off biro top for the sights glass and then pictures on gloss paper for the petrol company and dial; finished with red and black gloss paint.

- Barry is a 'mod' and has to wear a 'parka' - a hand made pattern and pieced together, sewn and adorned with wool to imitate fur around the hood. Waxed thread was used for the hood and hem cords. 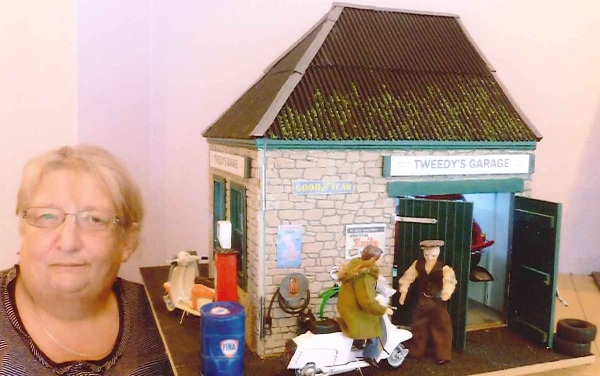