Have you ever heard of a relaxarium where dolphin sounds ring out in tranquil surroundings to help recarge your batteries?

Well, Lynda Hutchinson, from Wiltshire, has imagined one and brought it to life, albeit in 1:12 scale!

She put it forward as her entry for this year's Creative Competition, based around The Corner Shop.

Here are her pictures... and her own commentary on what's taking place...! 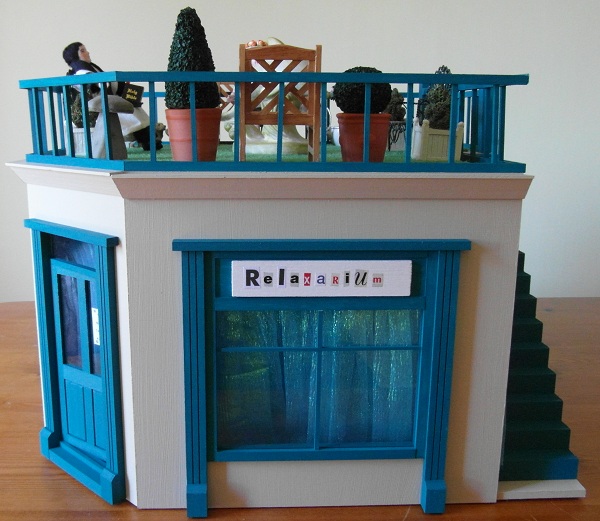 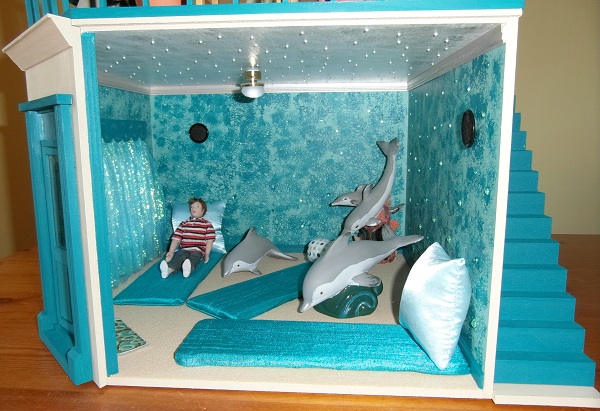 Coral finished studying Oceanography at University 2 years ago and was involved in an international research project into the calming effects of interaction between Man and dolphins.

As a result, she opened her “shop” or “Relaxarium” to help busy people to unwind and escape from the stresses of day-to-day life in the modern world.

She loves to see her customers emerge at the end of a session looking energised, smiling and care-free.  She is usually to be found in her hideaway under the stairs with her flask of coffee and her biscuits.

Downstairs, Nick is relaxing in Dolphin Depths.  The calming colour scheme and soothing music mixed with natural dolphin sounds lets him chill out after a hectic day teaching geography at the local secondary school. 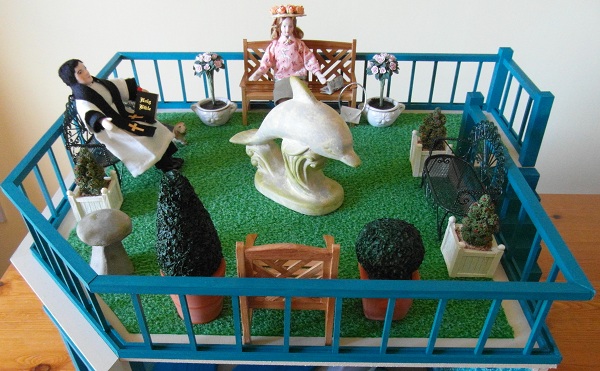 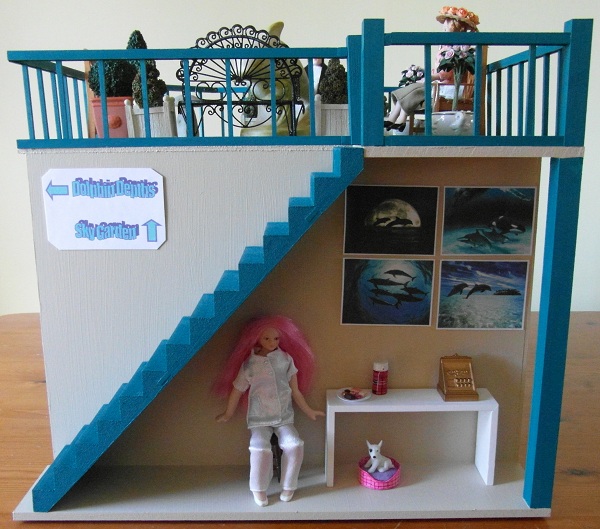 Upstairs, the vicar and Wendy are enjoying the peace and quiet of the Sky Garden with its enormous stone sculpture of a leaping dolphin. The vicar is a regular visitor, together with his dog Beelzebub, often preparing his sermons and thinking of money-raising ideas for the Church roof fund. Wendy likes to sit and read the paper before popping round to her friend Jane’s house for a cup of tea and a cake on Tuesday afternoons.

In Dolphin Depths, I tried to make the walls and ceiling give the impression that you are under water.  I used a main colour first and then achieved the “dappling” by using a contrast colour applied with a piece of washing up sponge!  Sparkly gem stickers represent the water glinting.

The dolphins were ornaments bought in charity shops and painted more realistic colours, the speakers were buttons and a bit of tapestry canvas painted black, the two large pillows were scented sachets and the beds and spotty pillow were home-made.

In the Sky Garden, I painted some of the pots and plants to make them look a little more realistic.  The dolphin sculpture was yet another charity shop find given a make-over.

I wanted a vicar in the garden but unfortunately the DHE vicar was no longer available so I had to adapt a cheap doll.  He underwent major surgery to make him taller (well, actually, he was completely cut in half, had a bunch of stuffing added to his middle and was then sown back together again).  I made his outfit myself and based it on the DHE vicar in last year’s catalogue.

I used the computer to print out the signs and Coral’s posters. Coral’s dog, Patch, was a lucky find on the pavement on the way back to the car after a shopping spree in Winchester.

I don’t think the Relaxarium actually exists, but it would be fantastic if it did and I would definitely be a regular customer! 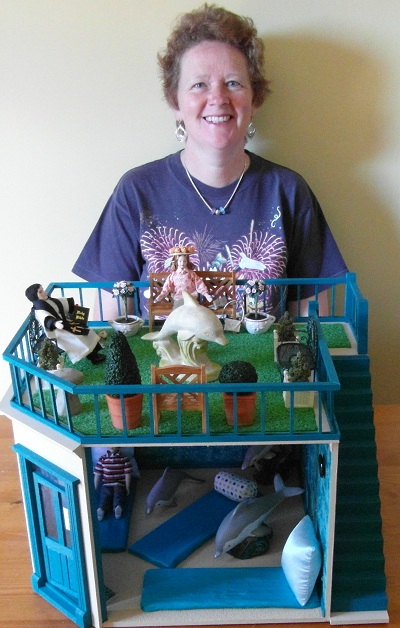