Today is cyber Monday, when people wake up and realise that it will soon be Christmas - and they’d better start buying presents!

BBC Radio Derby’s Jenni Hulse visited the Dolls House Emporium in Ripley, when she described herself as being surrounded by some “really impressive” models.

She was joined by managing director Colin Tilson who told her: “Cyber Monday is very important and indicates the start of the big peak towards Christmas.

“In previous years its been in November but being in December makes a big difference. I’d expect an uplift of up to 50% compared to November. It’s going to be in the region of 300 orders a day.

“Over the years our sales have migrated from offline to online. But we also sell to retailers and there are about 100 in the UK now. You’ll find us in Harrods and in the normal corner shops around the UK.”

Asked about where the potential conflict of shop versus online sales, Colin told her: “There’s that battle going on but it’s the way that it is these days and we have to make the most of the situation. Our focus is going to be online, really.

“The dolls’ houses themselves are always popular. We’ve got one called Kenmare Manor, a cross between children’s and a collectors’ model, which will always be popular.”

And here's what Jenni wrote on the BBC blog: 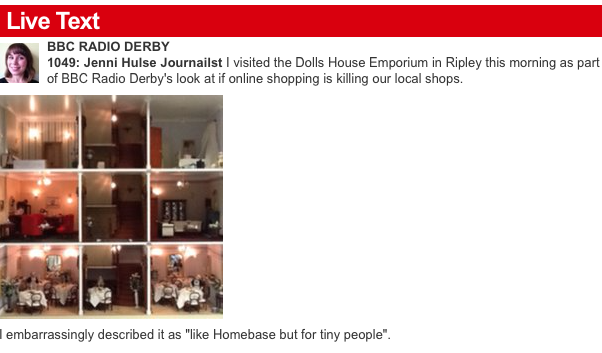