Dolls' house fan Jacqui Hiller has scooped the top prize in this year's Creative Competition, making superb use of her Corner Shop ensemble.
Jacqui, from West Glamorgan, wins £650 of Dolls House Emporium credit to spend on the kits of her choice.
She said: "This project has taken all of the past four months to complete and at times looked close to not finishing before the deadline.
"However, burning eyes from working late into the night apart I have enjoyed every moment from the creative aspect to construction."
Read on to find out the secrets behind her winning Tourist Information Centre and Cliff Railway. And take a look at her creation on video too!

“After trawling the web it appeared that several cliff railway station buildings were constructed of one storey at the bottom of the incline and two storeys on the upper level. This consisted of a waiting room at the top leading out to the street with a brick basement housing the mechanics. The design of the Corner shop with its outside steps meant a two level model might be feasible.
"The moment this years competition model The Corner Shop was advertised I knew I wanted to use both kits and convert it into some kind of British tourist attraction.
"I also wanted to join in the celebration of being British with the Queen’s Jubilee and Olympics taking place this year." 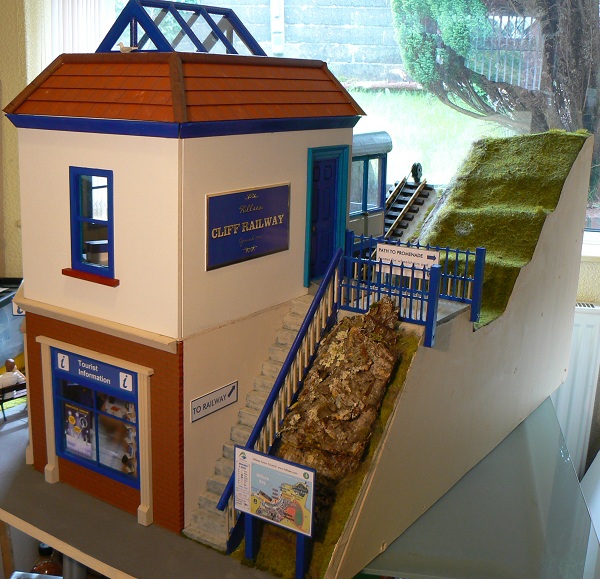 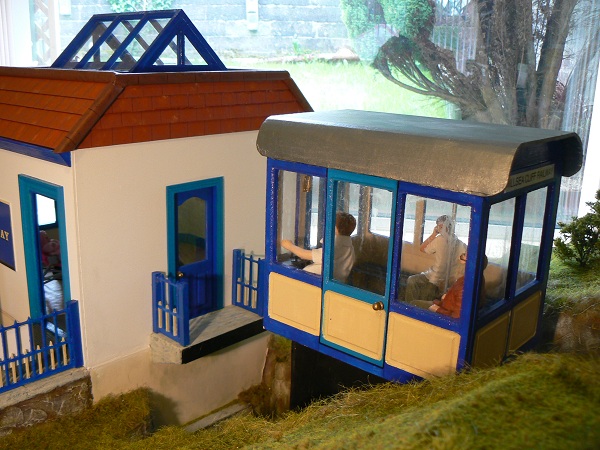 Before moving to Wales Jacqui and her husband lived and worked in Southend-on-Sea, Essex, and met working for the local authority Pier and Foreshore Department. Part of her summer season job was to operate the Victorian cliff railway that connects the sea front with the rest of the town. And the rest is miniature history!
Considerable Internet research convinced her it was possible.
She says: "After trawling the web it appeared that several cliff railway station buildings were constructed of one storey at the bottom of the incline and two storeys on the upper level; a waiting room at the top leading out to the street with a brick basement housing the mechanics.
"The design of the Corner shop with its outside steps meant a two level model might be feasible. By choosing to place my building down on the promenade there would be no need to house the machinery so a Tourist Information Centre could occupy the shop part of the structure." 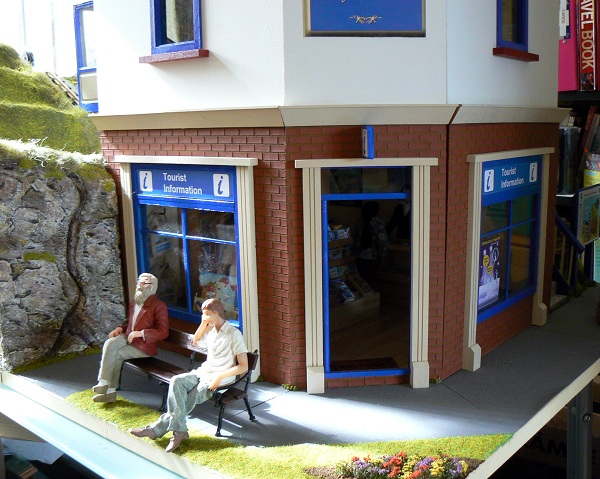 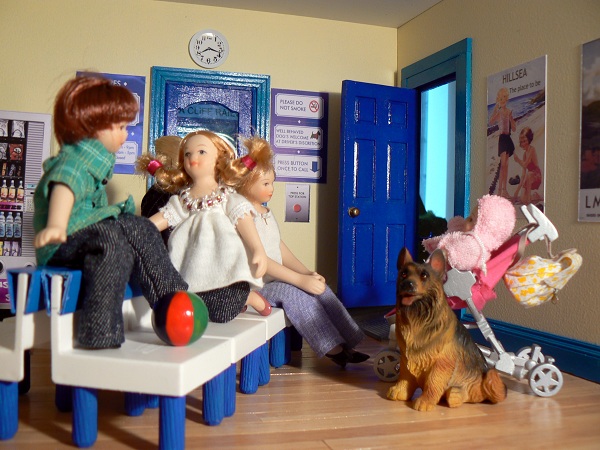 A new British seaside resort needed to be created for the project so whilst waiting for delivery of the kits she invented the little seaside town of Hillsea!
"Located somewhere around the coast of the British Isles, Hillsea has been created with a past and present. All signs, book jackets, leaflets, postcards and posters were designed with Serif Pageplus X6 publishing software due to its ease of use, royalty free images and JPEG resizing properties," she reveals. 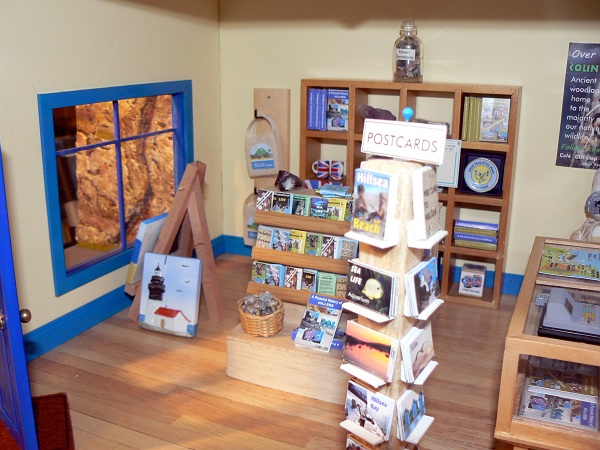 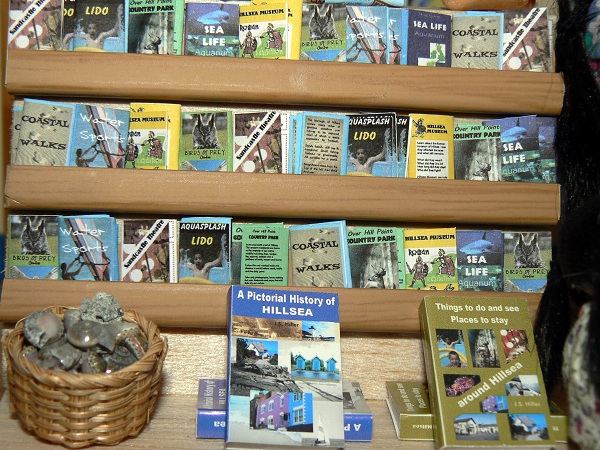 The front decals of the drinks and snacks machine in the waiting room, council logo, ‘you are here’ map, tide tables and notices for the information board were also created with the program.
"My husband Rod decided to construct the railway carriage and cliffs to allow me more time on the building. We were lucky enough to find an mdf greenhouse with detailing that lent itself to being a Victorian carriage from a dolls' house shop in Cardiff."
Rod removed the glass panelled roof and replaced it with curved one made from corrugated cardboard and foam board. He then lowered the slatted bench for a seat which was extended with additional slats made out of wooden drinks stirrers. A kebab skewer became the pole for standing passengers. The original roof is a sky light for the station, a length of garden-scale railway track was the nearest scale for the diorama and Rod mutilated a freight truck in the same scale for the angled undercarriage. The winding mechanism to raise the carriage up the slope began life as a pulley system for a model cable cars. 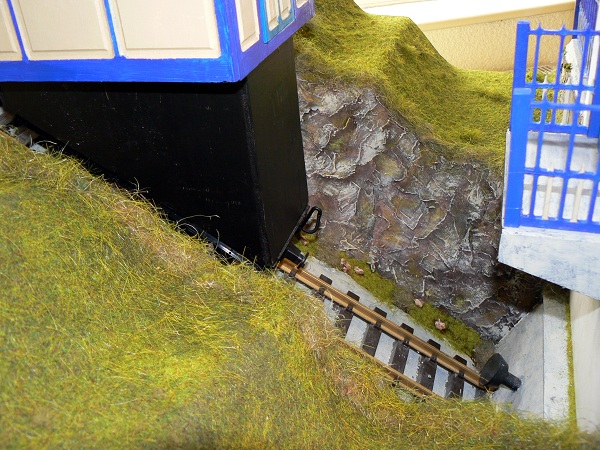 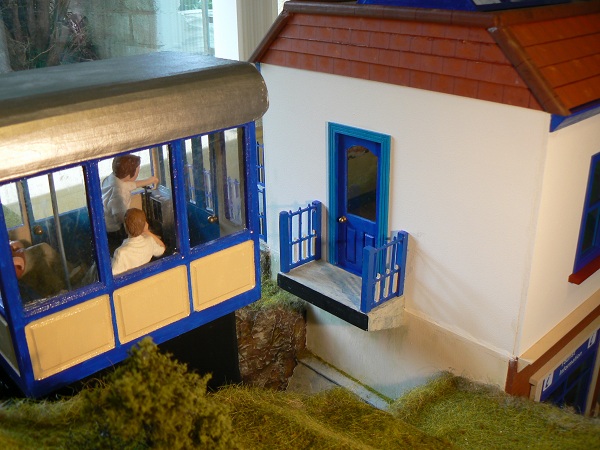 "Whatever the modelling project I endeavour to make as realistic as possible. The 3D brickwork sheets were more expensive than I really wanted to pay but look so much better than paper.
"The same applied to the real wood flooring. For the concrete steps and path I applied Woodland Scenics concrete paint over matt black emulsion for a dirty finish. Council paintwork often used to be coated in thick gloss which was created using acrylic paint with triple thick glaze on top. The roof tiles are weathered strips of mounting board with wooden angled beading from a local diy store for the ridge tiles."
Chunks of insulation board were used to form the cliffs with wood for the track bed. Thin card strips covered with plaster bandage and a thin coating of multipurpose coving adhesive sealed the plaster and also provided a good rocky surface.
To make all the station entrances and exits disabled friendly, ramps were constructed from balsa wood and foam board covered with a thin corrugated card wrapping material for the non-slip surface.
Grass fibres were Woodland Scenics and Noch with tufts from hanging basket liners for the wild unmown bits. A grass mat was stuck with PVA glue to the cliffs with the aid of a heat gun to adhere to the uneven surface. The mat was liberally covered with hair spray and static grass fibres in varying lengths and shades puffed on top to get them standing up. Teased out chunks of the basket liners were stuck to the edge above the rocky cutting and cliff face for the long untidy grass. The blooms in the flowerbed are made by MiniNatur A base coat of dark brown was painted onto the rocky cliffs and when dry other colours dry brushed to highlight the surface texture. The tarmac path is sandpaper and cork bark forms the rocky outcrop. 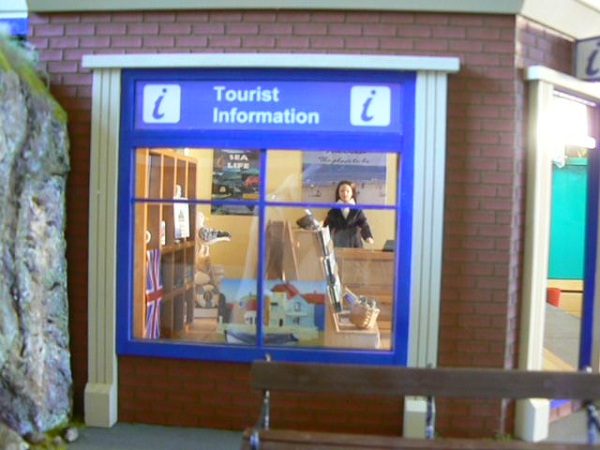 The shop counter, clock, wicker basket and shelving came from Dolls House Emporium fixtures and fittings. The modern till and chip and pin machine are Delph Miniatures and the easel was from a discount store. The seaside paintings started out as fridge magnets and the seagull display stand came from a RLNI shop. The body of the drinks and snacks machine was bought at a good price as a damaged fridge freezer. 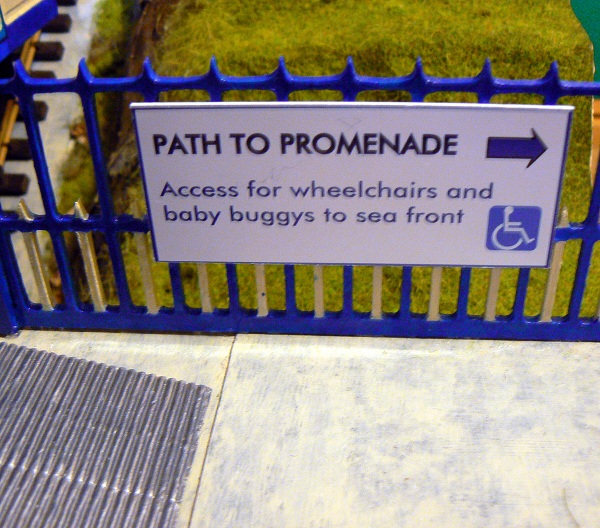 Other fittings are handmade. The leaflet and postcard stands are balsa wood and small lumps of plastic beading. The bag stand with rails is a wooden venetian blind slat with coat hanger wire. The best budget buy was a bag of bits from IKEA display furniture, which cost the grand sum of 10p! Plastic bracket covers and a plethora of wooden dowels were turned into the waiting room bench seats. These were finished off with blue document slide holders. Other items from the bag produced the buffer stop and control box and seat for the driver. 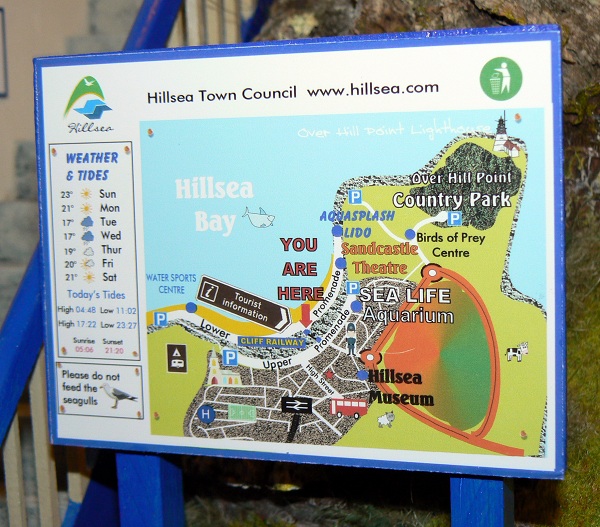 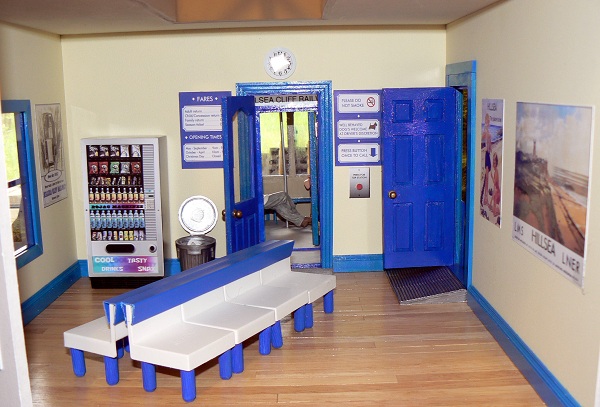