Montgomery Hall dolls' house has been in The Dolls House Emporium range for eight years and has recently featured in a fashion shoot for Company Magazine with Peaches Geldof.

Following the well-established base of six rooms leading off a central staircase the house features and elegant hallway and internal doors. The hipped roof adds to its charm as do the palladian columns and portico detailing. A grand and refined dolls' house indeed.

You can buy Montgomery Hall on the The Dolls House Emporium website.

In 2007, The Dolls House Emporium introduced Lake View.  A radical change from the traditional view of a dolls' house, Lake View featured a full height window and mezzanine level. Fitted out with a spiral staircase and designed to be the perfect modern residence with open plan living, Lake View really was a bit of a departure from the previous dolls' houses.

A grand design in miniature, we're sure Kevin McCloud would approve. 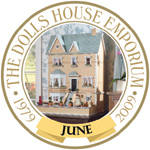 This month you can receive this charming Anniversary Plate featuring Holme Lodge FREE when you place an order for just £25. Here's a little bit of the history behind the dolls' house.

Introduced in 2003, Holme Lodge was designed with the Victorian Era in mind. The steeply pitched roof, gingerbread detailing and spiral staircases certainly made it stand out from the crowd. The dormer window and bay window on the ground floor add to those authentic Victorian touches and we're sure houses just like this one would have graced many a smart Victorian street. The design is still popular today as the house lends itself to many enthusiasts' tastes.

Do you own a Holme Lodge? We'd love to hear what you've done with your dolls' house in our comments field below. 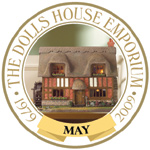 We're into the 5th of our series now and this month we have Mill Cottage for you FREE when you place an order over £25.

Introduced in the Autumn of 2002, Mill Cottage was a new adventure for The Dolls House Emporium. The house was made entirely from of polyresin and designed by Mike Marsden of Yesteryear Homes.  With only 500 ever made, it was always intended to be a limited edition and it's sure to remain a sought-after and elusive house for the serious collector.

Do you have a Mill Cottage? We'd love to see your photos, hear your stories and find out what you've done with yours.

30 years ago, a Tudor house designed by a family friend led to Jackie Lee and her then husband, Adam, starting up a quirky little company, selling dolls’ houses and miniatures. Who’d have known at the time that the company would grow to be the world’s leading supplier of dolls’ houses and miniatures? Amy Gutierrez interviews one of the country's leading business women.

Q. Did you ever imagine that from a small Derbyshire basement you’d be able to build such a successful business?
A. Yes – you have to have a vision and the faith and anticipation to make it happen. It still took four years to get out of the basement !

Q. What’s the biggest thing you have learned along the way?
A. To maintain your integrity and work for the greater good.

Q. What has been your biggest mistake?
A. I’ve made lots of mistakes but I try not to dwell on them. If you’re stuck in negative thought patterns you’ll repeat the mistakes !

Q. And your best decision?
A. From a personal perspective, bringing my daughters into the company.

Q. What has given you the greatest sense of achievement?
A. Giving others responsibility and employment, which builds self-esteem. Over the past 30 years we’ve employed over 500 people directly, and many more indirectly.